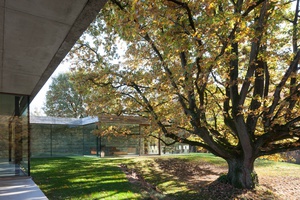 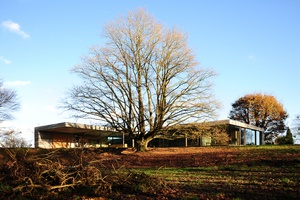 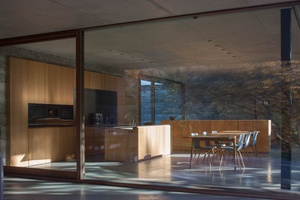 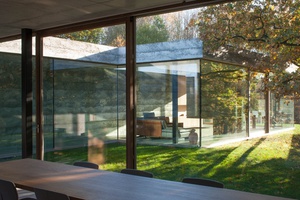 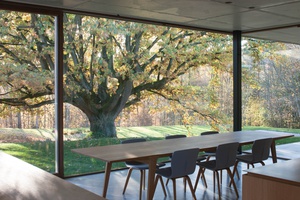 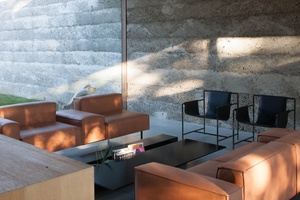 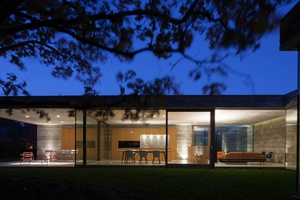 The HIFI house is just as much a product of nature as of humans. It is in perfect harmony with the landscape that surrounds it. In fact, the house is a result of its natural environment and, in particular, a tremendous tree, an oak worthy of the most magical fairy tales.

The clients were captivated immediately by two beautiful trees on this site, nestled in an area of mixed building materials with vegetation providing the link between them. When the former owner pruned one of the trees, it caused consternation. Only the fact that the most magnificent of the two trees remained intact and the promise of slow regrowth of the second, convinced the new owners to go ahead with the purchase in spite of this. When the architect arrived on site, the project took off immediately, inspired by the strength emanating from the oak tree, especially the power of its bark. Bruno Erpicum wished to infuse the force of this material into the house which would echo the energy of the powerful trees.

The site has three floors, one at street level, a plateau and then a steep slope to the end of the garden, the site of a former swimming pool. This natural relief has been maintained. All the former elements of the house have been preserved in their original state. The terrain around the dwelling has not been landscaped and the house seems to melt into its natural surroundings.

The house reaches out as two wings that open like arms around the tree, but at some distance so as not to disturb it. In fact, the house is tucked in between the two trees, turning towards the most majestic one. The house faces the landscape, the tree and turns away from the built area. The entrance and the garage are to the north. A wall perpendicular to the facade protects the bedrooms and the public area.

The coarseness of the bark of the oak tree is reflected in the material of the house, made of unvibrated shuttered concrete where the aggregates can be seen. Each concrete layer of 30 centimetres has been crafted in a manner that is similar to sculpting stone to an ideal texture. This results in a surface that is alternatively smooth and coarse, just like the bark of the tree. These rough-textured walls spread out between two huge smooth concrete surfaces, the floor and the ceiling. This contrast is fundamental and has a balancing effect. Other materials alternate with the robustness of the concrete: the glass of the windows and the polished oak of the furnishings. The house is literally inhabited by material. The reduction of the height below the ceiling to 2.4 metres accentuates the framing effect and the formal power of the space as a whole. The very strong lines of the roof and the walls alternate with great transparency, always seeking to balance the contrasts.

All the details were designed with clockwork precision so that the material can speak for itself and take priority over the decor. Moreover, this architecture avoids showing off techniques; everything works in unison like a living being. No mechanisms are visible: the doors on pivots operate with a specially developed hydraulic system and there are no visible rails, above or below, the sliding doors. Most of the windows are picture windows so that the frames are minimal: these are simple wood inserts that form the transition between the glazing and the concrete. In contrast, the frames of the rare sliding bay windows are displayed like picture frames. The columns are crosses of poured steel. The light fittings are set above the concrete slabs so that light literally comes from the material. The bodies of the taps are inserted into the concrete formwork. For this the plumbing work was done as part of the main building work with the same applying to the electrical fittings.

The house also had to be insulated by designing enough external concrete walls that would not be in contact with the inside. Thus, there is never a concrete wall that is both inside and outside.

The result is a powerful living structure in which every graft and element contributes to the overall energy that it exudes. The materials used do not deteriorate, they mature.

This house brings to mind a grotto and a return to our roots but with the advantage of modern comfort. Living here is an experience that is both physical and spiritual. The architecture projects us into a fundamental dimension of our experience as a living being as part of nature that surpasses and embraces us at the same time. It reconnects is to our roots and our deep-seated essence.